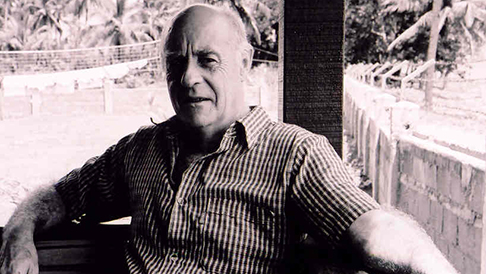 This is a story of the Northern Ireland conflict that’s tragic yet uplifting, heart-breaking yet heart-warming. How one man, broken by the most horrendous murder of the woman he loved, ultimately found redemption and peace half a world away from home.

Stories come to me in all sorts of ways. And I’ve got Radio Ulster’s John Bennett and Anne Marie McAleese to thank for this one. I happened to have the radio on in the background while I worked in my home office one day in 2003. At that time John Bennett had a morning show, and I was vaguely aware of him playing a dedication for someone from Portadown, now in the Philippines. The name was Lockhart, and it crossed my mind it might be a member of the Lockhart family who lived near me in the late 70s when I had my first job as a reporter in the Portadown News. It was a fleeting thought which I promptly forgot.

Perhaps a week later on Saturday morning, Radio Ulster was again playing in the background. My ears picked up when I heard on Your Place and Mine, ‘Lockhart’ and ‘Portadown’ once again. Terry Lockhart was running an orphanage in the Philippines, and a Lurgan music shop owner, Ray McLeod, was fund-raising for him.

It was scant information but instinct made me want to learn more and eventually I sought out Ray. I don’t know what I was expecting, but it wasn’t the story I found. Terry Lockhart’s sweetheart, Christine, was a victim of the horrendous IRA fire-bombing of the La Mon Hotel in 1978, one of 12 people to die.

As a television reporter, I’d stood outside La Mon a few days after the events delivering a line to camera which included the words “…one of the charred bodies could be identified only because of an artificial limb.” That, was Christine Lockhart.

Before long I contacted Terry in Mindanao, an island in the southern Philippines. Yes, he’d love me to come and tell his story.

Dermot Lavery and Michael Hewitt are two of Northern Ireland’s finest film makers with their company Doubleband Films. I took my idea to them, and before long they’d secured a commission from the BBC. So Dermot, cameraman David Barker and I, were soon on the road. We had no notion the modestly-budgeted film would ultimately win the RTS Best Documentary Award.

But more than that, the audience took it to their hearts. Northern Ireland people were generous. With the money he received Terry was able to help more orphans than ever before in his Children’s Village, some of them right through to university.

He was an unusual, a unique, character and we became firm friends. He downplayed what he’d achieved in the lives of the countless children he saved from “destitution or prostitution”, calling himself, in that Ulster way, a ‘coorse Christian’ just doing what he could.

“A lesson in documentary making.”
Irish Film and Television Academy

“Should be shown every week for a decade…it doesn’t often get as uplifting as this.”
Lynda Gilbey, Sunday Life

“Would bring tears from a stone.”
Eddie McIlwaine, Belfast Telegraph 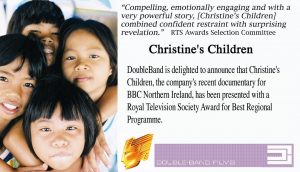